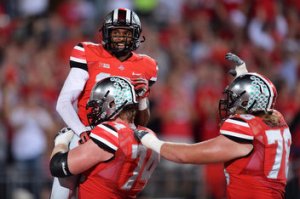 After taking a week off and enjoying some music at Austin City Limits, we here at the Rundown have pieced ourselves back together and are ready to get back to some College Football!  The Top 6 teams have stayed almost untouched for the first six weeks of the season.  Now that both Alabama and Oregon have faced true tests in Texas A&M and Washington and passed, that leaves Louisville as the only untested top 6 team.  We will give Louisville some props for avoiding the trap game against Rutgers and while Rutgers is a good team, they are nowhere near A&M or Washington.  Other notes…  We are still of the opinion that LSU has the best shot of making it to a National Championship game other then Oregon or Alabama at this time, even though we have them ranked at 7.  With the showdown between Florida State and Clemson looming, the loser will fall somewhere between LSU and Miami, thus giving everyone a dilemma, does the winner deserve to be 1,2 or 3…  That is going to be a huge choice, I think at this time it depends on who the winner is and how they looked.  But, it will be tough!  It’s too bad Stanford choked on Utah,  it hurts the overall street cred of the Pac12 and Washington.  Until that we would say that the Winner of Stanford vs Oregon would peg their ticket if they were undefeated and so was Clemson or Florida State but now the Ducks are going to have to be really impressive, not to mention games left against Stanford and Oregon State. (Oregon State is a whole different blog).  Even as we sit back and look at our rankings, UCLA and Baylor might be the most underrated teams and we’re not sold on Texas Tech and Auburn but the deserve the rankings for now.  Ok, no more rambling, here is our most recent installment of the Rivals Rundown Top 25 Teams, Week 8 Edition!

(Stats via Espn.com; Picture via sbnation.com)