After another great weekend of College Football, we sit trying to predicted what the College Football Playoff Committee will do.  We’ve now seen the movement with the polls but if there is one thing that the committee has proven, it’s that they are independent.  They have been looking at the “body of work” and eye test of these teams and carrying less weight on where the teams were ranked in the preseason.The tough part comes when we get to the grouping of Oregon, Arizona State, TCU, Baylor, Ohio State. A case could be made after the wins that Arizona State, TCU, and Ohio State posted this last weekend that all could be moved ahead of Oregon. It would be an accurate reflection of how each week these teams should be re-ranked based on what happens across the board in college football. Based on common opponents, Arizona State has had more impressive wins and dominated Notre Dame but they have a loss, where Florida State doesn’t. The question is, “Is a bad loss to a top team better then a win vs a bad team”, that’s where this committee could make a difference. If we took strength of schedule for 1 loss teams vs Florida State’s schedule, we could move them to 9th! Which is crazy to think about but it’s the truth and right now, they don’t look as good as the teams in that top 8. What appears to matter most in the rankings every week is who you beat, with that, TCU and Arizona State should move ahead of Alabama.

Now, I want to say, in no way do I think that these teams are better then Alabama but for this week they should be ranked higher. If Alabama beats Mississippi State, they will move two the #2 team next week. So for week 12 of the college football season, this is what we think the top 10 should be: 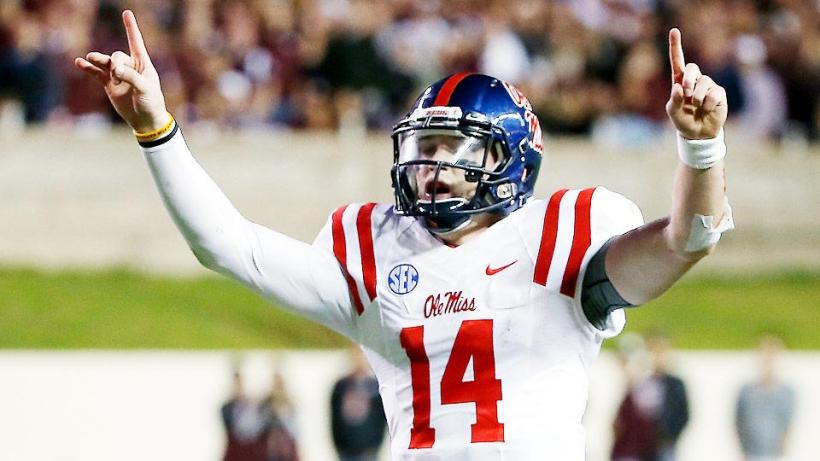 After a week of complete upheaval in College Football, we return to normalcy or something like it.  We can’t call it normal in College Football when the State of Mississippi is running the house.  As always, we don’t look at the rankings from the week below, this is based on where the teams are now, meaning, who cares if a team like University of Arizona was ranked 10th and loses.  We’re not ranking them 17th just because.  So here is are Week 8 rankings: 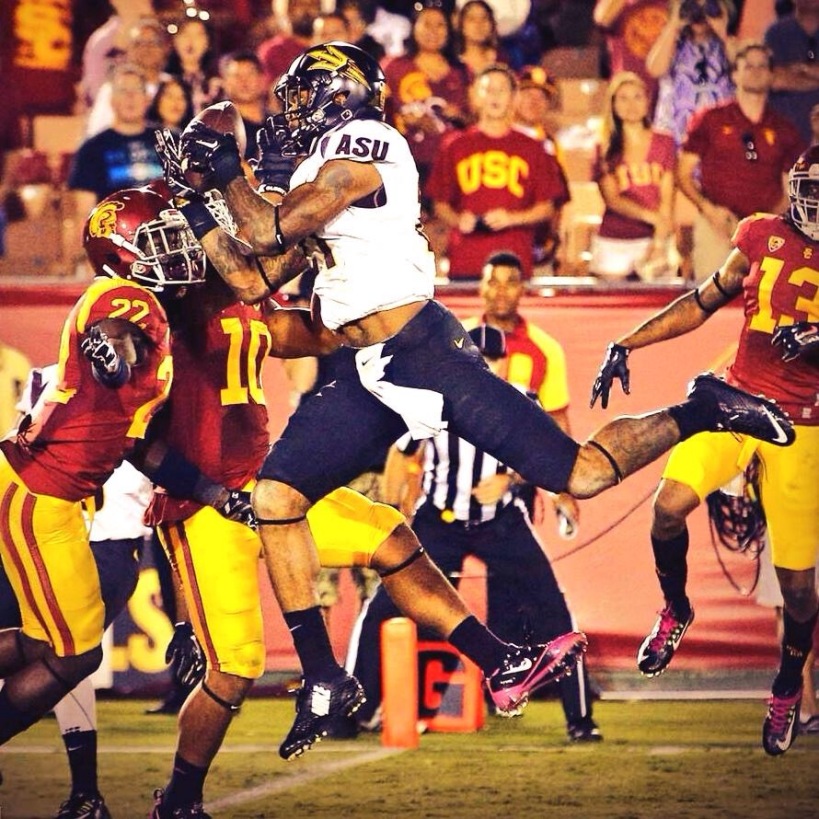 It’s a weekend that will live in College Football infamy forever.  The weekend that 5 of the top 8 teams in the country fell in defeat.  Let that really sink in for a minute…  Now here is the questions, is that because of an absurd amount of upsets or did all the pundits get it wrong?  I’m going to say, both!  I know, that was a stretch but here’s why:

First, we have tons and tons of games as compared to the NFL, this leads to too many unknowns for even the most avid fan.  Everyone is guessing on how good a team is based on what information they have been presented.  The problem, we try to take the previous year, the program’s history, the coach’s history, the history of the two teams playing, etc. etc…  This puts us in a position where College Football is all guessing until we see each team play each other, which doesn’t happen all the time, so then we’re back to where we started which is, the Eye Test.

Our First Top 25 Ranking for College Football of 2014 will be based on the Eye Test, we’re going forward based on what we can tell from what we’ve watched and what we think.  Here is our “Eye Test” Top 25 or the Rundown: 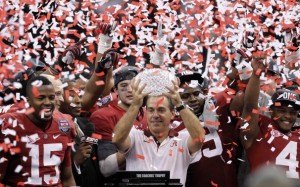 If this is your first time checking out our rankings here at the Rundown, there are a couple of things that you need to know.  The first thing is that we have a West Coast and Pac12 biased.  Yep, that’s right we are in Pac12 Country and watch a lot of late night College Football on Saturday Night’s  (Sometimes we even watch Hawaii).  Now, the second thing you should know about our rankings is that we don’t care about where teams might have been ranked the week before, every week we wipe the slate, look at the teams across College Football and we rank based off of what’s in front of us.  Why is this important?  It becomes relavent when a team like Virginia Tech loses to Duke or Stanford loses to Utah, in some polls voters don’t want to move someone out or down too far because that is accepting the fact that they were wrong the week before, us, we don’t give a @#%#$^.  So, with the side notes out of the way, we present to you our Week 9 College Football Rankings…

1.  Alabama 8-0
“To be the best, you’ve got to beat the best.”
When we sat down to put together this weeks edition, we really honestly thought that Florida State should be here based off of the body of work but looking back at each teams wins, losses, and the overall performance in all games…’Bama is still #1.

2.  Oregon 8-0
We know, we know… I just said that I was going to rank Florida State #1, well not just yet.  Remember when I said we are biased, yep that’s right!  Oregon is the second best team, now with the games coming up, this will be settled within the next week.

3.  Florida State 7-0
The SEC is the best conference, then the PAC 12, then the ACC right?  Well we think that it’s actually a tie between the ACC and BigXII, the reason all comes down to the Duke upset of Virginia Tech, it to some street creed away from the ACC’s depth.  Back to Florida State, if they Miami, they will jump Oregon until the Ducks face off with Stanford after their bye week.

4.  Ohio State 8-0
The Buckeye’s have an easy schedule, it’s not all their fault that, oh wait yes, yes it is.  Scheduling Buffalo and Florida A&M is not going to help your National Title hopes in a year that the Big Ten as a conference is down.  The Buckeye’s however have a better chance then the top three teams of going undefeated in the regular season.  With a light challenge from Indiana and Michigan left, a back to back perfect regular season is in the sights, now let’s see how they close.

5.  Baylor 7-0
The Bears have done what was needed for them to be here, they are putting up impressive and shocking numbers.  They made it to the bye week perfect and now have a breather before the schedule turns and they face a gauntlet of Big XII teams.  We ‘ll talk more then…

6.  Miami 7-0
The Hurricanes return to a National Title Game rests with the Florida State match-up.  If they win they stay in the conversation, a loss and they will drop based off of a weak ACC schedule.  We’ll also watch for a let down against a tough Virginia Tech defense.

7.  Clemson 7-1
We look at who Clemson beat and lost and they deserve to still be ranked the highest of the one loss teams.  They beat Georgia before Georgia suffered for a ton a injuries and even though they got destroyed by the Seminoles, they have still only loss to the #3 team in our rankings.

8.  Stanford 7-1
The Cardinal will see if they can steal our dream of a ‘Bama vs Oregon National Championship and also become the best one loss team in the country.  We think that Oregon will win this time and Stanford will drop to a top 15ish team.

11.  Oklahoma 7-1
Another team that is hard to read and with a little luck and an extra week to prepare for Baylor, The Sooners could find themselves moving in the right direction.

12.  Texas A&M 6-2
With a nice break in the schedule right now, the Aggies are retooling and getting ready for the final stretch after they see if they can beat the spread on UTEP.

14.  Texas Tech 7-1
The Red Raiders showed they could play to the last minute against the best, now with a big stage game behind them, let’s see if they can put the finishing touches on what could be a special season.

16.  UCLA 5-2
They have lost only to Stanford and Oregon, we’ll see if it breaks them like it did Washington or if the rise back to win to Pac 12 South

17.  Fresno State 7-0
We have proof of one thing, if Carr and the Bulldogs are in games late, they have the ability to win and they believe they will win no matter what.  Carr should be in the Heisman talk based on his performances winning games for his team.

18.  UCF 6-1
Only loss to South Carolina and a nice win against a team we had going undefeated, we’re not going to discount them and no way rank them below Louisville, that’s just disrespectful.

19.  Oklahoma State 6-1
After one trip-up let’s see how the Cowboys finish the season…

20.  Louisville 7-1
Here’s the thing, Louisville has enough talent that we serious believe they could compete in a bowl against anyone but the question is: with BCS in question, can the Cardinals keep focus and finish out the year.

21.  Northern Ill. 8-0
Not sure if we’re buying the Huskies as a top team but we respect what they’ve done so far.

23.  Michigan State 7-1
Could this be the year the Spartans finally break through?

24.  Notre Dame 5-2
Since the loss to Michigan, Notre Dame has become a better team.  Now what for the Golden Domers?

25.  Arizona State 5-2
The Pac 12 South should come down to UCLA and the Devils, can ASU win on the road and close out the season?

Week 4 of College Football is now upon us and here at the Rundown we’re feeling pretty good. Not only did our team steal a W and stay in the Top 25. Our Top 25 had little movement, which any week that happens, means we’re doing something right over here. The biggest Loser of Week 3 was Nebraska and that hurts, not only did we post a blog just about how “bullish” we were on the Huskers a couple of weeks back but we had them in our Top 10! Sitting watching the beginning of that game, we were waiting to see what Nebraska’s Defense would do and man did those black uniforms look good! So good that UCLA thought the jersey’s were freshly laid pavement and left tire treads all over ‘em. So Nebraska quickly became our Most Overrated pick, let’s see if they can fight back into our Top 25 or if they falter…Back to the rankings, So Texas A&M might be the first team ever to move up in rankings based off of a loss but the way they played against Alabama, the deserve to be higher, the other big movers are UCLA and Ole Miss. We would like to point out that Arizona State and Wisconsin didn’t move, we had them in and they will both stay in… until this coming Saturday when the Sun Devils square off with our #11 team Stanford Cardinal then they might be the biggest mover. No big match-ups other then that PAC-12 North vs South. Look later this week for a preview of a couple of our favorite games. Also, if you missed our story on CJ Brown go check it out, his stat-line: Passing 15 of 28 for 277 1TD 1INT Rushing 16 for 122 1 TD and put Maryland on our Rivals Rundown Top 25 Radar, still the best player no one is talking about.